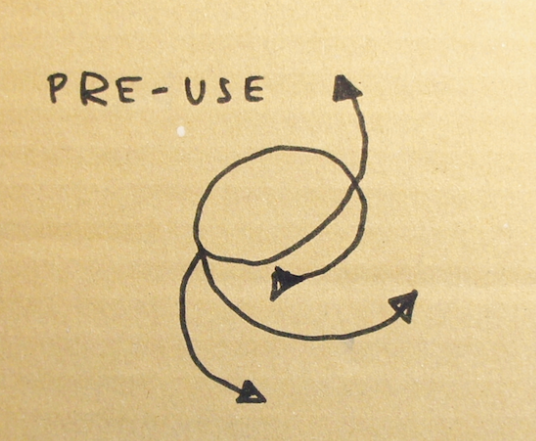 Meta
Title: Pre-Use Introduction
What: Article
Ordered by: SELF

We like to introduce you to a new term and practice: Pre-Use.

Pre-Use is about creative reuse or repurposing of things. But also about preservation. So you reuse something without destroying it.

In short: Pre-Use means to use something for something different than it was meant to but you leave it intact so it still works as initially intended afterwards.

*
We learned the term from Jan Koerbes from ReFunc. He told us also about the the architecture collective Umschichten that use the term ‚Pre-Cycling’ to describe the same practice.

Here is a good example for it: Umschichten collaborated with the french group BellaStock on a project where they borrowed wooden sticks from a building material store to build infrastructure for an event. They did not cut or paint or drilled the sticks – they did no harm at all! So when the festival was over the sticks were still the same and could be returned to the hardware store to be sold for their initial use.

Some more examples of Pre-Use
*

*
What makes Pre-Use and Circularity such a good combination?

Pre-Use is a very good approach to Circularity! A few reasons why:

That might make in fact Pre-Use the single great rule or the perfect basic operation to make a circular world emerge! Imagine everyone would make this a basic rule: „You always have to have at least 3 positive ideas about the future use before you start to use something“ – a circular world would emerge from that quickly! “Pay it forward”!

+ 3erlin Grid & Openness – The Open Structures and our 3erlin Grid idea is a perfect example for PreUse-Design! Design for multi-reusabiliy! And there you can see that Openness is a key for Pre-Use or that the best Pre-Use-Ideas are probably impossible to design protect anyway.

And Now: Grow The Collection

We will play with Pre-Use at Mifactori a lot more and explore it! We have a Pre-Use-Category here on our page where you can see others posts talking about Pre-Use and sharing examples.

And we have also a huge Flickr album with lots and lots of examples we update every now and then.

And here is an open collection of Pre-Use examples on the OSCEdays forum where you can contribute to.

And now: Pre-Use! And talk about it. For example by sharing this article.

The basic concept of Pre-Use (without the “leave it intact” part) is of course as old as humanity probably itself and was often promoted with different terms. Here we start a collection of links and hints we found.

Try Pre-Use in groups. It is fun!