designers and advocates of Open Source Hardware. Because we think it is a potential key contribution to a sustainable, climate friendly and resilient future. And many people share this view and understand it. The problem is, they don’t understand the licensing – the legal side – of it. There are a couple of misunderstandings out there that actively block and undermine the development of open source hardware.

Let’s fix things, together! We made some meme-pics. Feel free to pick one and share or post it whenever you see someone making a mistake or spreading false explanations. Let’s make people ask the right questions. Let’s clean up the internet. (More info on the collective campaign below ↓) 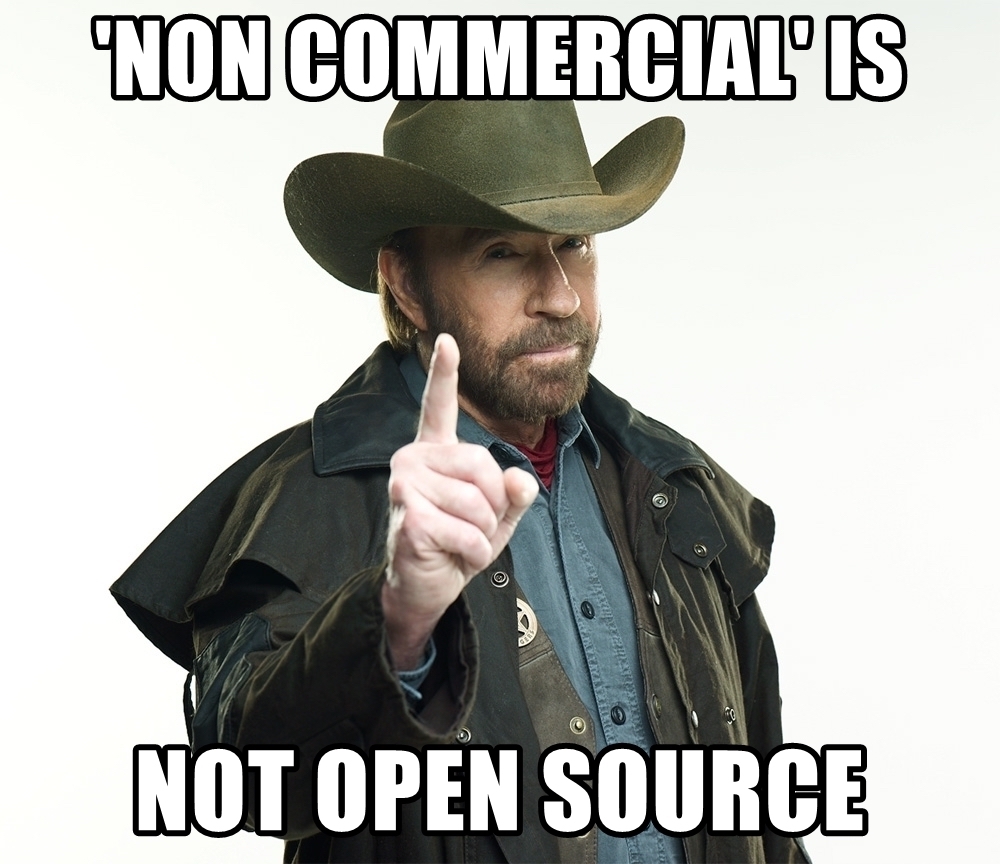 Group #2 Copyright based licenses are not for hardware. 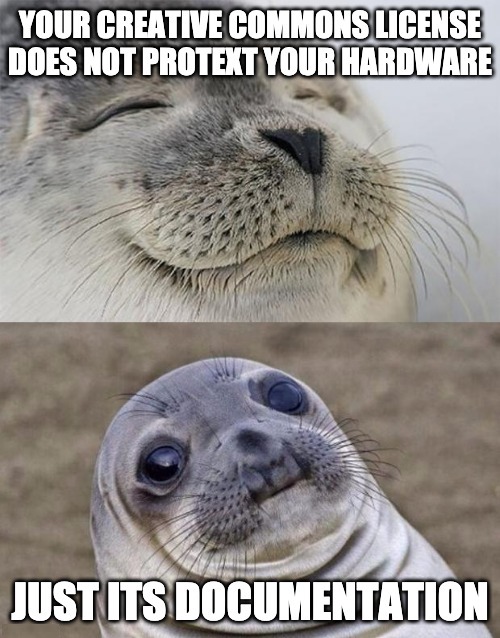 Not sure what this means? Here are a few resources on licensing open source hardware. Catch up!

Do you want to see open source hardware done right and grow too? Yes? Let’s help each other and start some collective action to improve the current situation.

Both problems produce and spread false understandings of open source and free hardware which undermines and blocks its true potential and collaborative energies.

So let’s do something, together! Here are 3 things that each of us can do. Together we might be able to create change and put us and open source hardware on a better path.
.
↓ Click to open the actions
.

Whenever you see (1) a project on the web that claims to be “Open Source” but uses a “Non Commercial” license, or (2) when you see people trying to claim property rights for a hardware design using a Creative Commons license –  just post one of the memes above. In a public thread if possible.

We learned a lot from the openness activist Sam Muirhead and his inspiring engagement for the Commons. Whenever Sam saw a project claiming to be “Open Source” but using a “Non Commercial” license Sam made the bold move to write a personal email to the creators. In this email he explained very friendly but effective why this is wrong and how to fix it. Usually with success : ). We asked Sam to share this email publicly so that others can send it out too. He did. So feel free to send it out. Be brave like Sam. Friendliness and precision are your friends.

A copy of Sams email to copy:

Why are “Non-Commercial” licenses not Open Source?

The Creative Commons CC-BY-NC, CC-BY-NC-SA, and CC-BY-NC-ND licenses retain a commercial monopoly on a project or product. They do not meet the terms of the Open Definition, Open Hardware Definition, Free Culture Definition, the Free Software or Open Source definition, and cannot be called ‘open source’.

The NC licenses are problematic for a variety of other reasons. One of these is the incompatibility between NC licenses and true open source licenses – if, for example, you want to incorporate content from Wikipedia in your project, you would be infringing upon Wikipedia’s CC-BY-SA license.

Similarly, if you develop a fantastic resource as part of your project and somebody else improves it, develops it for a different format or use, and wants to then contribute it to an existing open source project, it’s impossible – by choosing an NC license you make your work completely incompatible with the commons.

‘Non-Commercial’ is also an extremely vague term which has unfortunate effects. For example, in 2014 the non-profit German public broadcaster Deutschlandradio was successfully sued for using an NC photo on its website, as the court interpreted NC as ‘purely private use’.

Due to this danger, many non-profits, community and commons organisations avoid re-using NC material, further limiting the spread of your work and the opportunities for publicity and improvement this can lead to.

Calling something open source – when it is not – does harm in two ways:

First, it confuses the issue, and makes it less clear to people what open source means, and how it works.

Second, it borrows credibility and deserved kudos from those people and projects who have in fact open sourced their work, and are giving people the freedom to study, understand, modify and sell their products or derivatives thereof.

So in order to avoid misleading people or continuing to falsely claim something which you are not in fact offering, you will need to either:

a) change the license to one compatible with the various Open Definitions, which have been developed and agreed upon by democratic, community-led processes, and reflect the views of the users and creators of Free/Libre/Open works. (CC-BY and CC-BY-SA are acceptable under all of these definitions).

or b) stop referring to your project or product as open source. Of course if it involves open source components, by all means mention them specifically, but be clear they are only components and that the project itself, as it is under a proprietary Creative Commons license, is not open source.

As someone who promotes and supports open source in all its forms, I would naturally prefer that you choose a), and if you have concerns about ownership or business strategies etc when allowing commercial use of your work, I’m happy to give suggestions and offer advice as to how you can deal with those concerns and take advantage of the opportunities for community growth and external input which you can only get with truly open source projects.

But whether you choose a) or b), this issue needs to be addressed – I assume that the error comes from a misunderstanding, but it could be seen as dishonest if not dealt with.

The heaviest but most promising lever:

Let’s ask the “maker platforms” to change their communication around licenses. Content creators and visitors need to understand that Creative Commons licenses only apply to the documentation of a hardware design (descriptions and pictures of it) but not to the hardware design itself! It should be clear that the moment you post a hardware design on the platform it becomes free hardware – free to use for everyone in any way they see fit (unless of course a patent or design rights where registered before or the design is some kind of art work). Users and creators should be made aware of this instead of giving them the illusion that with a Creative Commons license they have some kind of control over their hardware. They don’t. And this is a good thing! More on this here.

So, let’s do it! Write to the platforms and ask them to change their communication. Ask them to stop to actively create misconceptions. Ask them to become partners and accelerators of a free hardware movement instead of actively holding it back through miscommunication.

For example there could be a little info box or link explaining what this license actually talks about and what not. Something like this maybe:

Send them an email. Ask them to change this. And just send them a link to this post here if you don’t feel like explaining all of it in your own words.

Here is an email template to use or build upon:

I am a user and fan of open source hardware. I noticed that you let your users pick a Creative Common license for their projects on your page. This is great!

By this you spread miseducation and misinformation about licensing and the legal situation around shared hardware designs and the freedoms people have with them. You basically undermine what your platform is for – giving people things to study, build (upon), share and use – in their own way.

You also contribute to the spread of misconceptions about how collaboration on free hardware legally really works. So please change this and make clear to your content creators and visitors that the license only protects the documentation of the projects but not the projects themselves. And that the hardware project they share is free for everyone.

I assume that the error comes from a misunderstanding, but it could be seen as dishonest if not dealt with.

(More info on all of this is shared here: https://mifactori.de/open-hardware-license-campaign/)

All images and text in this article we own are shared under CC0 1.0 Universal (CC0 1.0) Public Domain Dedication license.